I am currently doing research on the Boeing Model 307 Stratoliner, for a recently acquired model. I would appreciate any information about design concepts from Boeing based around the Model 307. These could be either before or after the production aircraft.

Around 1938-40, a pusher version of the Model 307 was apparently under serious consideration. It's mentioned in this thread.
C

Here are some pictures of the model I found. I don't know if this could have been a design concept for the Boeing Model 307, or not. Parts of the model are very similar to a Travel Agency model made in 1939 for TWA. Two of these travel agency models are known to exist. The first one belongs to NASM, and is currently on displayed at Udvar Hazy. The second was restored by Doug Emmons of Doxaerie. I have been in contact with Doug who has sent me a wealth of information to compare.
The fuselage and Vertical stabilizers are similar to the known travel agency models, both in shape and construction. The wings however are a completely different shape than those of a Boeing model 307, but the length is correct for a 1/30 scale model. Also the stabilizers are slightly skinnier than on a Boeing 307. I would like to know if this could be a possible concept to the Boeing 307, before I begin restoring it back. 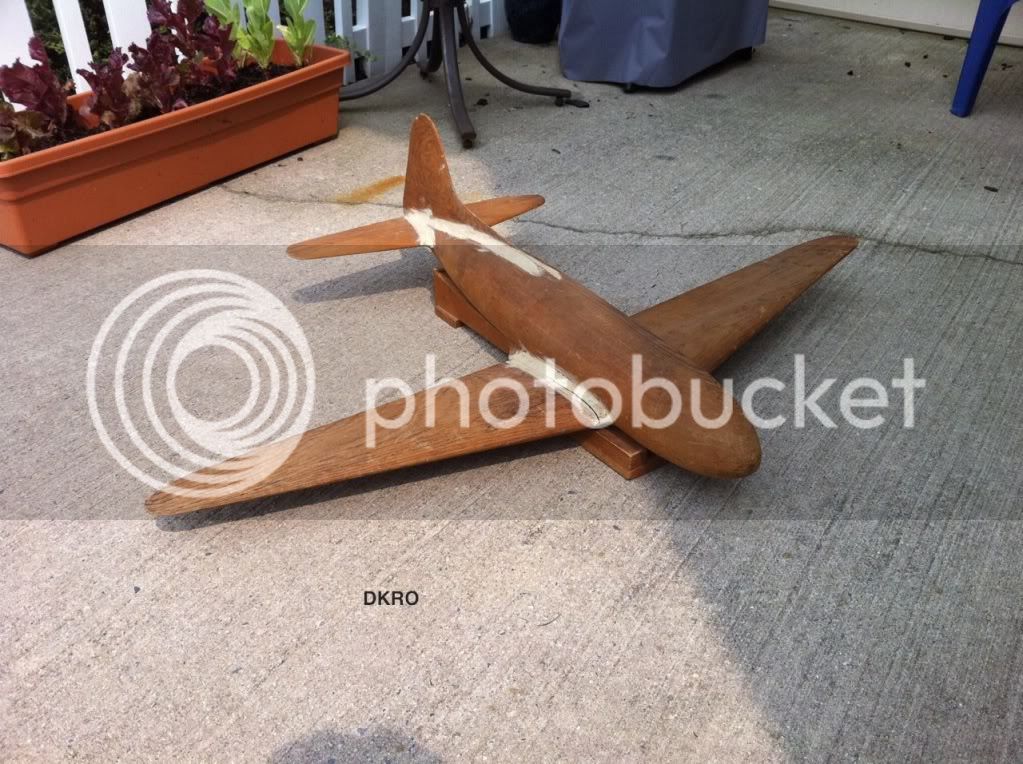 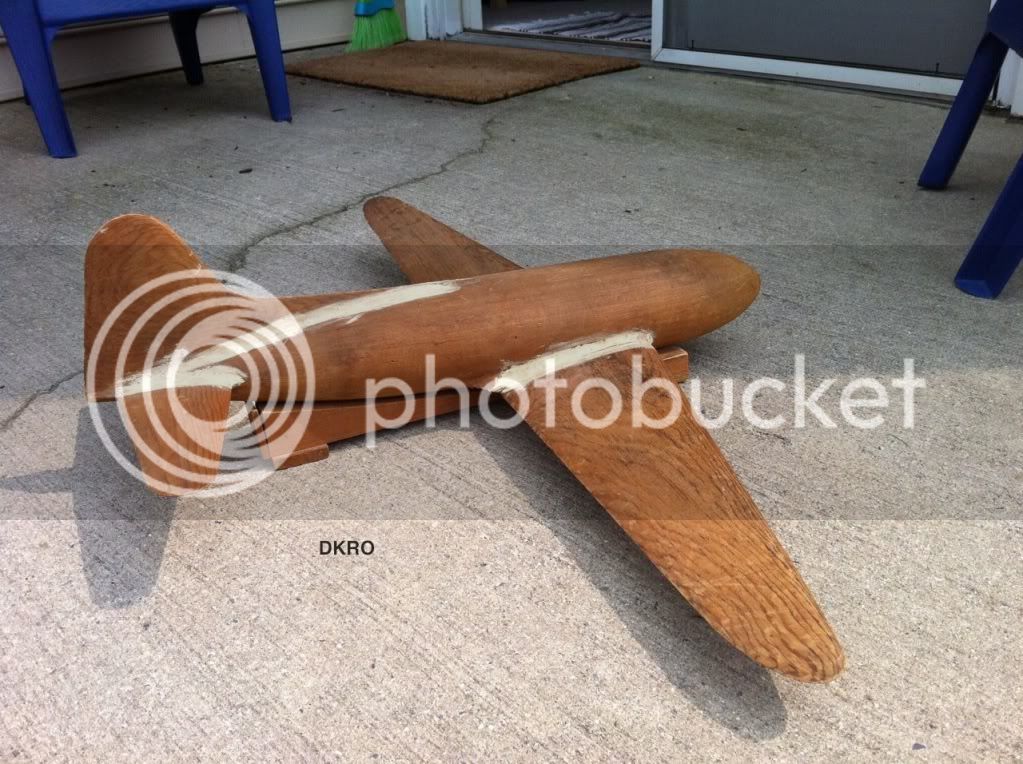 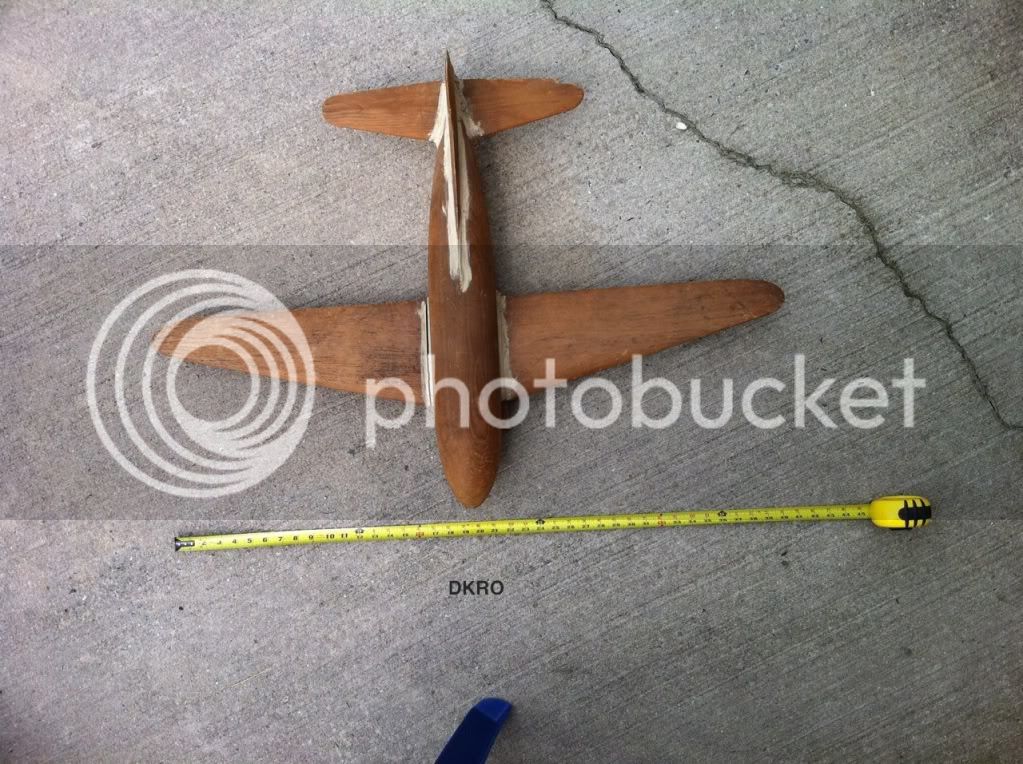 CAIR67 said:
I would appreciate any information about design concepts from Boeing based around the Model 307. These could be either before or after the production aircraft.
Click to expand...

Only derived design I know of (and one that was actually done for real!) is the... er... Cosmic Muffin. :

I saw that thing comeing down the intracostal one day at first i thought it was a c46 but then as it passed by i recocnised it as howard hough's old plane.

Mention of the C-46 got me wondering if CAIR67's solid model might not be a multi-scale chimera. Overlaying C-47 outer wing panels on the model gives a perfect match for the wing shape. I'm less certain about the horizontal tail. The C-46 tail is roughly the same shape (but only if the model's tail shape is distorted by the camera).

Funny thing, just when you posted this I was thinking the same thing. However, a couple of glitches with the this theory. First the model wing does have the same profile as a C-46 OUTER wing, but where is the straight inner wing section? Second the picture of the horizontal stabilizers are not distorted. Third the vertical stabilizer is more Boeing shaped than Curtiss shaped. Curtiss rudders for the most part had a round trailing edge shape. The rudder on a Boeing Stratoliner was designed straight at the back. Fourth the fuselage is completely the wrong shape for a Curtiss C-46. The fuselage side should be "double bubble" shaped. Also I noticed on the C-46, the fuselage comes to a point the closer you get to the nose. The Boeing Stratoliner is more blunt, like this model is.
One possibility, one of the previous owners thought it was/wanted to make it a C-46 and thus modified the wings. There are heavier carving and sanding marks on the wings than any where else on the model. If the top down view of a Stratoliner wing is larger than what is currently the wing on this model, than this theory could be true.

David: I wasn't suggesting that your model was actually meant to represent a C-46 -- originally or as a later modification. The fuselage and vertical tail are clearly meant to represent the Model 307. But the current wing is a perfect match for the outer panel of a Douglas C-47 (as in the retouched image).

I had also pasted the outline of an outer panel from a C-46 (not quite as good a match in shape, IMO). With camera distortion eliminated as a possibility, the C-46 is indeed a lousy match for the horizontal tail.

In short, what I'm suggesting is that at some point the outer wing panels (sans centre section, nacelles, etc.) of a larger-scale Douglas C-47 (or DC-3) solid model were attached to the fuselage and vertical tail of the Boeing 307 model. Perhaps the modeller's goal was simply to have a complete wooden shape made from available parts?

Another possibility is that this model dates from the days just after the USA's entry to WWII, and was part of some proposal to produce a 'chimera' design for a transport, for the same reasons that lead to such projects as the Fisher XP-75

Since the Model 307 was based on the B-17C with a new fuselage, I doubt this is a model coming from the development stage of the Stratoliner (I don't see the company, with all the problems they had, lose the experience they'd gathered on the B-17) I agree it could be a derivative with a new wing (but why ?) or it could be an altoghether different Boeing model number (absence of the engine nacelles is a problem for identification). Or it could even not be a Boeing.
L

Maybe this could be interesting:
http://www.doxaerie.com/stratoliner_model_restoration.htm

I also found that the initial Boeing designation for the Stratoliner was model 300...

Thanks Lark. Interesting to note the wing break locations. If that chimera theory is correct, it would be simple matter of the modeller matching the dowels to the replacement wing panels.


what is the main different between Boeing Model-307 and Model-307S ?.


a small info about it here;
http://www.fiddlersgreen.net/models/aircraft/Boeing-299.html

The answer is given in the text Hesham. "The Boeing 307 and 307S - the latest derivative of the first by adding compressors, pressure regulators and other equipment necessary for the flight at some 6000m" meaning the 307 was merely a variant with pressurisation, which was the eventual production model.
You must log in or register to reply here.
Share:
Facebook Twitter Reddit Pinterest Tumblr WhatsApp Email Link
Top