Thread to discuss Boeing pre-ATF and ATF studies
If you have something to share, please post it here.
A

Here's a scan of the Boeing ATF submission from an old World Air Power Journal, the date I can't remember (don't have the book here in front of me).

From what year was the Boeing Microfighter?

It's interesting that the parasite fighter concept was still being considered this late! The last illustration seems to suggest that there's a landing gear bay in each wing, but no hint of a nose gear- tail-dragger perhaps? Minus the weight of the nosewheel, it might be an option.

These small RFP top-views seem to come from the same source. Are they grouped together in it, and if so, could you post the "whole picture"?
Also, do you have side-views like the Boeing and McDD ones of the other ATF proposals?

Is there a better quality image of this?, to better appreciate the change in cross-sections? 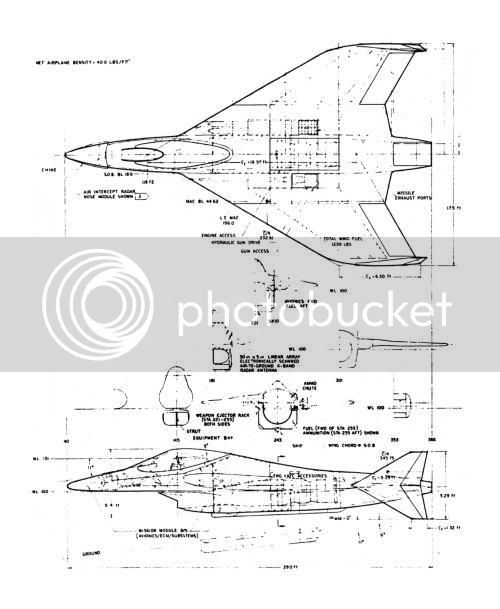 A variation on that design:

Thanks for posting that sferrin, I've been looking for that pic for years. I think I had it in an old issue of Plane & Pilot.

Hmm, judging by looks alone it seems like most of Boeing designs were closer to interceptors than pure air superiority fighters.

Tactical short take-off and landing (STOL) research iinitiative was initiated at Boeing in mid-1981 and concluded in 1982 in cooperation with USAF Wright Aeronautical Labs.The tactical air-to-air role was selected for analysis. The study vehicles were much more than
STOL configurations. Advanced technologies incorporated in the designs allowed them to have relatively long radius capability with
substantial supersonic cruise legs, superior levels of maneuverability at high fuel fractions and short field capability . Yet, airplane sizes remained attractive.
Click to expand...

How do you comes to the Model 985 designation ?

If you will check images posted more carefully, you will answer your question yourself.

You're right once again.
Sorry..

As is typical for Boeing, 985 family was a lot broader than this.

Here are some more members from:

From a report on onboard oxygen generation systems, naturally

Well, what can I say about these series..."My God - it's full of stars!"
I wonder why so broad family of various-purpose concepts was gathered under one model number?
S

flateric said:
Well, what can I say about these series..."My God - it's full of stars!"
I wonder why so broad family of various-purpose concepts was gathered under one model number?
Click to expand...

Perhaps the account that covered 'Model 985' was particularly large? ;D

BTW, always wondered, what is on your avatar?=)

flateric said:
BTW, always wondered, what is on your avatar?=)
Click to expand...

Honestly I really don't know.
This photo has always captured my interest but I've never been able to recognize the aircraft depicted in.

It's a long story: this photo was published in the number of June 1982 of the "Aerospazio Mese" (a monthly Italian aerospace publication that ceased its activity in 1986) in an article, firmed by the well known Nico Sgarlato, about the Stealth aircrafts.
At that time very little was known about Stealth, it was a mere "name" after that it could be hide everything.
The photo was obtained by Roberto Laghi at that time correspondent, from USA, for the magazine.

He obtained the photo by an unidentified source that was "involved in stealth design". The articole supposed that the aircraft depicted could be involved in the Stealth development.
The photo depicted a very sleek, black aircraft, with a long tail, huge winglets and (probably) a delta or double delta wing. The engine(s ??) was hosted in a underbelly canister. The general arragment could be intended for some type of high-supersonic or, at least, hypersonic research aircraft.
Obviously now we know that such aircraft, with its high-speed looking design, couldn't be connected in any way with the development of either F-117 or B2.

The autor of the article wrote that, looking at the photo, he felt a "deja-vu" sensation but wasn't able to recognize the aircraft.
At that time I was 14 years-old boy but I had the same feeling.

All over the years I tried to match the photo with known aircrafts but with little fortune (in principle the aircraft could be very similiar to a, heavily modified, Convair B-58 Hustler, but any Hustler was ever modified in that way). During the years I was conviced that the photo (if not a fake) could be connected with the dubbed "Aurora" programme (if ever existed a programme with this name.....).

Looking at the material you posted I saw some resemblace between the Model 985-430 and the "Mystery Aircraft" of the photo (ok the Boeing is too short, lacks of winglet but it is closer in design).

I used the photo of the "Mystery Aircraft" for this Forum with the hope that someone could tells me something about it......

It really did look like your wind tunnel model...and now I think of another Eric Simonsen photo-collages...