What is the fairing alongside the nose, please?

Don't think so, as the gun barrels of the turrets are clearly visible, but here not.
And the installation in 22444 was just a test against a failure of the remotely controlled
turrets, something that proved not to be necessary.

dear Jemiba.
It's just a question. I've think that, loocking the same photo
than yours
Bye

I beg to insist. There is a similar radome in the tal, and one on the side. They look like radomes for antennas, and I think they are radar antennas for bombardments and attack-warning and gun direction (the tail one).
T

As Skybolt told us ,it's a radar bulb, only on the starboard side
of the lower nose, as can be seen on the 3-viewdrawing
in U.S.Bombers B1-B70 by Lloyd S.Jones.AeroPubl. Inc.

Thanks Paul. The radar was part of the K-1 radar bombing system, that was the real motivation for building the B-54 in the first place. Problem is that the modification needed to install it would have forced a radical redesign of the fuselage, and the 1949 FY budget was particularly tight, so the B-54 was cancelled.
T

hello
Thanks IARK and SKYBOLT .I know the budget problem
and modifications to be done to the airplane..but I don't
see ,I don't have the three views drawing
THANKS AGAIN

Is it just me, or does it look like that it has an extended belly, similar to that on the Stratocruiser?

Also, would the USAF really had been interested in a piston-powered throwback to WWII by this time? The B-47, which I always figured was a de facto replacement for the B-29 and associated programs, was well into service and the A-1 may very well have been the only piston combat aircraft left when the B-54 would've entered service.

Apparently, Curtis LeMay agreed with you.

Opinion is divided among historians though. According to Walter J. Boyne "the success of the B-47 resulted in the [B-54A] order's cancellation". But Joseph F. Baugher says that LeMay wanted more B-36 piston heavies with additional B-47 jet mediums only as a back up plan.
S

Well, that produced a few posts!
Thanks, Skybolt especially.
F


Just call me Ray said:
Is it just me, or does it look like that it has an extended belly, similar to that on the Stratocruiser?

Also, would the USAF really had been interested in a piston-powered throwback to WWII by this time? The B-47, which I always figured was a de facto replacement for the B-29 and associated programs, was well into service and the A-1 may very well have been the only piston combat aircraft left when the B-54 would've entered service.
Click to expand...

Is there any chance of someone with computer skills and talent (unlike ones self!!) of doing a sort of overlay 3-view drawing of the production B-50A and the proposed (and almost built) B-54A, so as to give a comparison???????

Don't know, if it really fits your needs, the 3-view of the B-50 is said to have been the
D-, not the A-variant, source was (a long time ago !) the "Enzykopädie der Flugzeuge",
a very small drawing of mediocre quality at best.
The B-54A 3-view was taken directly from "Llyod S.Jones "U.S. Bombers B1 - B-70",
most drawings there are quite basic, too.

I take it the shorter fin of the B-54A is due to the longer fuselage? Same reason A318's have a larger fin than other A320 family aircraft.
P

Thanks Jemiba for both your time and effort!!!

That helps heaps to envisage the proposed difference.

Those outer external tanks must have contributed greatly to the proposed B-54A's weight!
Are they part of the reason for the additional outer engine mounted landing gear?
For some reason I envisage outer wing fatigue problems, had the B-54A have entered service! (but I'm not an aerospace engineer!!!!)

Nor am I, but the positions of the engine nacelles of the B-54 had moved further
outward, although the wing chord at the root seems to have remained the same.
That makes me think, that the whole wing may have been a new construction.
F

I don't recall the exact numbers, but Lloyd Jones' book on US Bombers I think said the wings were extended something like 6' at the root & 4' at the tip.

Nor am I, but the positions of the engine nacelles of the B-54 had moved further
outward, although the wing chord at the root seems to have remained the same.
That makes me think, that the whole wing may have been a new construction.
Click to expand...

Found 2 photos of B/RB-54A mock-up at San Diego Air & Space Museum gallery on Flickr. They are erroneously captioned as “Martin : B-57 : Canberra”.

HI !
Last picture
What is this?

Maybe it's the angle, but the mock-up looks really cheap in the second photo. Like the plywood and paper constructions created by British firms when budgets were tight - not the sort of thing you'd expect of a SAC-funded bomber program of that era.

TomiTheTajner said:
HI !
Last picture
What is this?
Click to expand...

Good question, it looks like some sort of gondola, the photo captions say "looking aft" which suggests that that turret is pointing forward, in which case it may well be the forward lower turret though we can not see it on the cockpit picture. The gondola is probably a radar housing (AN/APQ-24 as used on the B-36B). You can just about see the gondola on the underside of the forward fuselage in the artists impressions posted earlier in the thread.

Interestingly, looking at those artists impressions it looks like the B-54A would have had 2 AN/APG-3 gun laying radars, one in the tail and one in the nose. Equally interestingly sources seem to say that the aircraft would have had 14 0.5 inch machine guns as defensive armament, looking at the artists impression one can just see what seem to be 3 barrels coming out of the tail turret, it is possible that a 4th would have been obscured by the radome, and the that section of the rear fuselage appears to stay quite wide suggesting a quad mount. At a guess the two quad turrets (tail and forward upper) were both slaved to an AN/APG-3.

Looking at the artists impression again, there may be a triple 0.5 inch in the tail with the AN/APG-3 mounted above it, both aft and just below the sight line of the manned position, and a single 20mm mounted above it...?


A feature on the Boeing B-54A mock-up inspection of 1948 is now up at RetroMechanix.com: 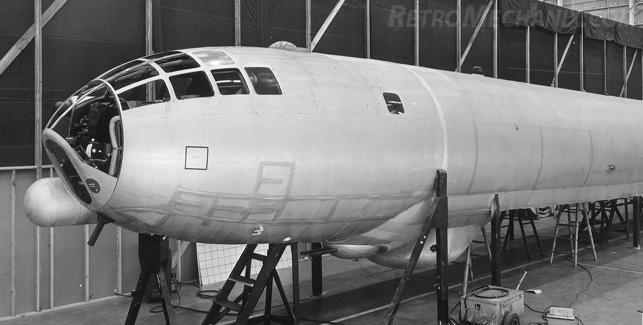 It features 48 high resolution drawings and photos of this forgotten final development of the B-29/B-50 bomber series. Enjoy!


Thank you very much for the post! That is an excellent collection of pictures. That answers virtually all of the questions about this aircraft!
C

I had been looking for a detailed drawing of the Farrand Hemispheric Tail Gun Sight, and here it is, on the B-54 mockup. Thanks to Jared, life keeps getting better and better!

You're welcome guys! This is all the material I have on the design; hopefully more will emerge in the years to come. Photos of the original YB-50C mock-up and the B-54A mock-up inspection of February 1949 (which undoubtedly featured additional changes) would be interesting to see, for instance.

circle-5 said:
I had been looking for a detailed drawing of the Farrand Hemispheric Tail Gun Sight, and here it is, on the B-54 mockup. Thanks to Jared, life keeps getting better and better!
Click to expand...

Indeed, one forward and one aft along with the gun aiming radar, I am assuming that each quad turret was tied to a radar and hemispheric sight...?


This mock-up also clears up any doubts about defensive armament, 14 x .50 inch it was.

According to a book by a Boeing engineer who was there (called "Road to the 707" or something similar - I'll update the attribution when I find the book), the B-54 was seen within Boeing as the major revenue program for the 50's while the B-47 was seen as a project with less potential. The B-47's performance apparently surprised most people, even within Boeing, because drag estimates for the engine nacelles were based on experience with radial piston installations. It turns out that the drag caused by the cooling air passed over radial engines and ejected sideways was not appreciated and so the drag reduction from the much cleaner airflow over/around the jet nacelles was underestimated.
If it seems unlikely that such a fundamental lack of knowledge could exist into the late 40's, recall the 3-pack powerplants pasted under the wing of Martin's contemporary XB-48. The tunnels between the engines were supposed to minimize drag but actually functioned as fixed airbrakes.
Besides the B-47's performance, the other factor working against the B-54 was that the added landing gear under the outer nacelles would have required a major runway and taxiway widening program.
Share:
Facebook Twitter Reddit Pinterest Tumblr WhatsApp Email Share Link