Going out on a limb here, because I have a writing/illustration project in mind (for the last 20 years). Who has heard of an Air Hero series of stories, printed in the 1930's and reprinted in the 1970's (by Air Trails Magazine) called The Adventures of Bill Barnes? If you were a fan of the flight combat games "Airpower" and :Crimson Skies", Barnes may sound/feel familiar. Currently, I have copies of the 1970's Air Trails magazines and have scanned the articles and collected numerous drawings of the aircraft. I want to put something together that would "re-boot" the character. My first question to any fans out in CyberLand is: who currently holds the copyright and if it has lapsed?
Also, does anyone know of a little magazine from the 1980's called 1919-1939 Air Wars? It was published and edited by Andrew Anson out of LA. I'd like to get in touch with him again (did some scale drawings for him waayy back).

I cannot help you for your project. But if you can edit this one in the future. I'll buy it. For sure ! 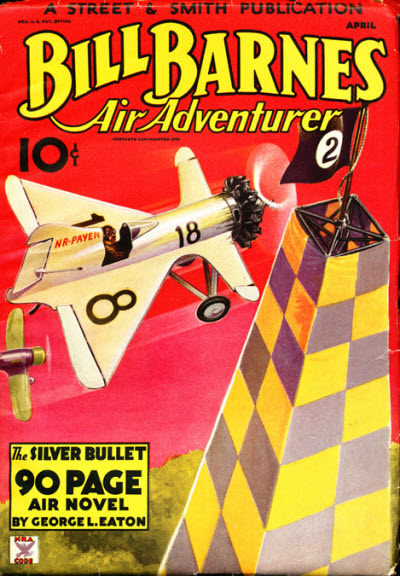 The original Air Trails also got together with the Bill Barnes stories for a time during the 1930s, sometimes presented as Bill Barnes:Air Trails and sometimes as Air Trails: Bill Barnes.
The mags all had mixed content besides the lead story and the main cover artist, Frank Tinsley, usually seems to have written a bit about the subject of his cover inside each edition.
R

My dear departed Dad had a hundred or so “Bill Barnes, Air Trails” magazines from the 1930s.
Next month I am going back for his funeral and will hunt through his garage for those old magazins.. Ask me again at the end of September 2019.