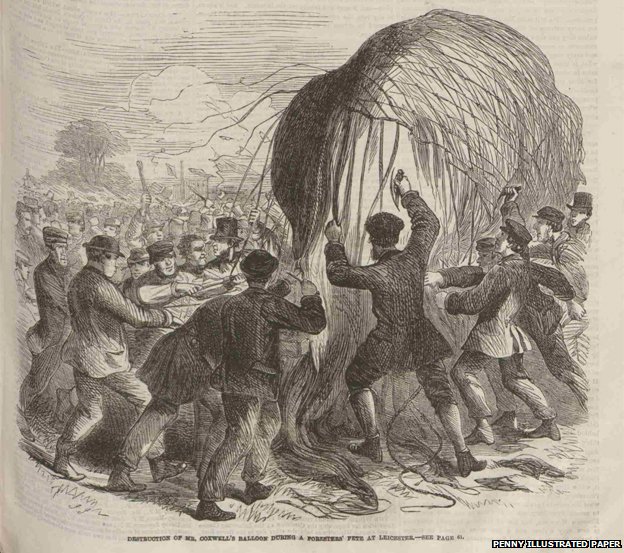 
Europe's largest balloon festival is staged this weekend in Bristol. We trust there'll be no repeat of the scenes in Leicester in 1864. Author Jeremy Clay tells the little-known tale of Britain's balloon riot.

The distinguished gentleman ran for his life - his clothes ripped, his hair dishevelled, a furious mob hot on his heels, baying for blood.

Behind him lay the ripped-up, burning remnants of his livelihood. What with one thing and another, his balloon display hadn't gone quite as well as he'd expected.

It had all started so promisingly, too. A crowd of about 50,000 people had gathered on the racecourse in Leicester that summer's day in 1864 to see the feted aeronaut take to the skies.

Henry Coxwell wasn't just an aviation pioneer, he was something of a celebrity too. Two years earlier, accompanied by the meteorological scientist Dr James Glaisher, he'd soared up to the stratosphere, curious as to what might happen next.

What actually happened next was Dr Glaisher went temporarily blind, then passed out. Coxwell, who had lost all sensation in his gloveless hands, could well have followed suit, had he not saved them both by opening the valve-cord with his teeth.

Such shivering dash and derring-do made him a hero, so when he agreed to appear with his fancy new balloon Britannia at the Order of Forester's fete in Leicester, admirers arrived from as far and wide to see him soar into the skies.

But as the punters gathered, and Coxwell made his pre-flight preparations, there was trouble afoot.

"Early in the afternoon, a gentleman, reported to be a professional man, gave it out that the balloon then present was not my largest and newest balloon but a small one," Coxwell would later write to the Times.

"This was a cruel libel," he added, but the rumour spread all the same. "This Coxwell," they muttered, darkly, "he's taking us for mugs."

As the mood soured, the masses pressed in. With barely any police on duty to control the huge throng, "a perfect sea of clamouring spectators" broke into his enclosure, "everybody demanding an instantaneous ascent".

If he expected better behaviour from the well-to-do Leicester folk who were to accompany him into the air, he was sorely disappointed.

"Those who had paid their money and obtained tickets pounced into the basket in such a rude and unceremonious manner that all operations were stopped and the passengers themselves were preventing their own departure," wrote Coxwell.

"One person seated in my car was a disgrace to his town, as by his gestures and foul language he excited the mob and induced the belief that there existed on my part a disinclination to ascend.

"The pressure of the mob was now so great that my car was damaged, the network broken in several places owing to persons hanging on to the lower meshes, and a bottle was thrown into the balloon."

Enough was enough, thought Coxwell. He appealed to the nobler instincts of the crowd and warned that unless they eased back, he would be forced to let out the gas.

In return, they shouted abuse. "I forthwith executed my threat," he said.

"To the astonishment of everyone," reported the Leicester Chronicle, "the canvas which a few moments before appeared, every inch of it, to be well filled with gas, began to hang loose, and flapped in the wind so much it was soon apparent that the gas was fast escaping.

"All doubt on this point was soon dispelled, more especially in regard to those people immediately surrounding it (for the stench became intolerable) and every moment the size of the balloon became less and less; the wind filling its loose folds, and causing it to pitch and toss about considerably, and threatening every moment to fall on the heads of those who stood near it.

"Finally, the whole structure fell into a shapeless mass on the ground."

And that's when it really kicked off.

"The crowd who stood around immediately seized upon the net-work and material of the balloon and tore it into a hundred shreds," said the paper. "The car was next - set fire to and burnt to ashes."

Insp Haynes and Sgt Chapman, stalwarts of the Leicester force, battled manfully with the rabble, but they were horribly outnumbered.

"It was brave but hard work," Coxwell wrote, "for nothing short of the destruction of my balloon, and indeed an attempt on my own life, appeared a sufficient sacrifice.

"While the work of demolition was proceeding, Sergeant Chapman led me away amid yelling and derision. My clothes were soon torn and then the cry was raised, 'Rip him up,' 'knock him on the head', 'finish him'."

Dashing for safety, Coxwell found sanctuary in the nearby home on the Town Clerk. Back on the racecourse, a man who had been taken for the aviator was attacked, and his coat pulled to bits. The more entrepreneurially-minded, meanwhile, began selling remaining pieces of the balloon as souvenirs.

"I never witnessed such barbarous ignorance, baseness and injustice in my life," a letter-writer complained to the Chronicle after returning from the ruckus. "I feared Mr Coxwell would be killed. I was knocked down thrice myself simply for endeavouring to defend him."

The correspondent added a PS: "They have burnt the balloon and are parading its remains through the town, having just passed my window."

Condemnation of the brouhaha swiftly followed. A report of The London Review of Politics, Society, Literature, Art and Science said: "No man who commits himself to the science of ballooning can tell where or amongst what people it will carry him, as Mr Coxwell has just discovered.

"It set him down on Monday amongst a horde of savages as fierce and untamed as South Sea Islanders and differing very little from them except in their habitat, which was at Leicester.

"It is humiliating to think that after all the civilising influences which have been exerted upon them, so much of the savage should still linger in the blood of our working classes."

In Leicester, the blame for the uproar was put on out-of-towners. Excursionists. From Nottingham, perhaps. But to no avail. The town was stigmatised.

And so, a short-lived nickname was born. People from Leicester are known as Leicestrians. For reasons that needn't trouble us here, you might also hear them called Chisits. But for a while in 1864, thanks to Punch magazine, they had a new title - Balloonatics.


Penny Illustrated Paper image provided by The British Library Board.
Click to expand...