The latest Aviation Week had an artists rendering of a British UCAV under development, but the pic was sanitized to protect some of the UCAV's features. It looked alot like a larger version of the swept wing UAV they recently tested at Woomera in Australia. I believe the program is named Taranis.

Here is a Taranis UCAV demonstrator image that is attached to Qinetiq's latest release on the subject.

Can't really see anything of it in the published pics - but then wasn't really expecting to.

Possibly more interesting are the fairly close up shots of Mantis in the background.

Very nice! It means, that it will be presented also at Farnborough so I can take a look and make the closeups ) BTW BAE webpage has veeery large 12+ Meg photos from the roll-out.

From the high-resolution photos, it would appear that Taranis adopts the landing gear from Saab's Gripen.

Very nice! It means, that it will be presented also at Farnborough so I can take a look and make the closeups
Click to expand...

I'd expect a lot of pr from BAeS at Farnborough, but pretty much zero likelihood of it actually being there. I'm told the mockup of Mantis will be making it's final outing at Farnborough.

Not sure how to embed flash video but here's Taranis being unveiled from the Telegragh website.

A new pic through Flight international.

I am wondering when we will be noticed about the first flight. In my opinion it already happened.

What makes you assume this?

1. Planned test program, that expected flight tests at Woomera during 2011 - 2012 (one year delay in development is already implemented there)
2. Long time from official roll-out (compared with other UAVs/UCAVs)
3. Fact that we were informed even about the existence of some British UAVs in the time, when they have already finished their test program (Raven is a good example)

Taranis, the UK’s unmanned combat air system technology demonstrator, has successfully completed a series of key tests on the way to commencing flight trials in 2013.

The low observable (LO) platform recently completed radar cross section tests at BAE Systems’ Warton site and the initial analysis has indicated that the programme has met and potentially exceeded the extremely challenging targets jointly aspired to by the UK’s Ministry of Defence (MOD) and Industry. In addition, the testing of the propulsion system has been completed. Undertaken at Rolls-Royce, the testing included measurement of Taranis’s infra-red signature and the results have demonstrated BAE Systems and Rolls-Royce’s credentials in designing and manufacturing an LO propulsion system.


As a result of these positive initial test results, the MOD requested an extension to the testing. The output of these additional tests is currently being analysed and due to this extension, the flight trials are planned to take place in 2013.


“The progress being made on the programme, and the learning we are taking from it, is very positive and the drive now to getting Taranis in the air clearly shows the confidence Industry and the UK’s MOD has in the UK’s ability to develop world-leading unmanned combat aircraft technologies and capabilities.”

Looks like BAeS are keeping the photoshop guys busy in the PR department; high-res image yes, but devoid of detail.

The UK has delayed the first flight of its Taranis unmanned combat air system technology demonstrator until "the first part of 2013", according to lead company BAE Systems.

Speaking at Warton on 19 June, Fillingham said data from the RCS test work is still being assessed by the UK Ministry of Defence and its Defence Science & Technology Laboratory, but that "the results are very promising".

BAE and its industry partners on the Taranis project have conducted a considerable amount of test and development work in the last two years, he says, also including successful engine intake integration trials conducted at Rolls-Royce's Filton site in Bristol.

Meanwhile, BAE is expected to receive a roughly £15 million contract around next month's Farnborough air show to study technology requirements linked to a proposed Anglo-French future combat air system design. Its unmanned systems partner Dassault will also receive an award of similar value to conduct work under the project. The bilateral effort is expected to draw on the pair's current experience with developing and preparing to fly their respective Taranis and Neuron UCAS demonstrators.
Click to expand...

What BAE people told me during quite short interview was that they postponed first flight from 2011 because they needed more component and engine tests to be sure, that everything will work. Now they want to do more RCS tests. But under line you can also read, that more than two years in delay have its reasons also in money, difficult budget times and yet uncertain possibility of cooperation with France.

Is there actual confirmation it will be supersonic? That sounds *highly* suspicious. Considering the shape and engine used. And general trend.

Anton, you know where you should send EF500 squad next!

It's oh so quiet!

Why does BAE Systems want to test fly the Taranis in the Australian outback rather than the British countryside?
I

Why does BAE Systems want to test fly the Taranis in the Australian outback rather than the British countryside?
Click to expand...

More predictable weather, massive amounts of security from the vast deserts around it, and oh Woomera is dry, very very dry. Perfect really. Well, unless we nab a test centre on a US dry lake bed ;-)

More importantly, Woomera is a dedicated weapons test range and with some 127,000 square kilometres (49,000 sq mi) is actually the largest land-based weapons test range in the western world. Having spent some time there I can assure you that there is plenty of room of 'nothing' should anything go wrong...perfect place for testing a UCAV.

Why does BAE Systems want to test fly the Taranis in the Australian outback rather than the British countryside?
Click to expand...

More predictable weather, massive amounts of security from the vast deserts around it, and oh Woomera is dry, very very dry. Perfect really. Well, unless we nab a test centre on a US dry lake bed ;-)
Click to expand...

I would imagine the Australian landlords are not as nosy as the proprietor at the dreamland resort.

I would also imagine there's no-one within hacking range either...

robunos said:
I would also imagine there's no-one within hacking range either...

I wouldn't be so sure!
S

From the UK MoD: 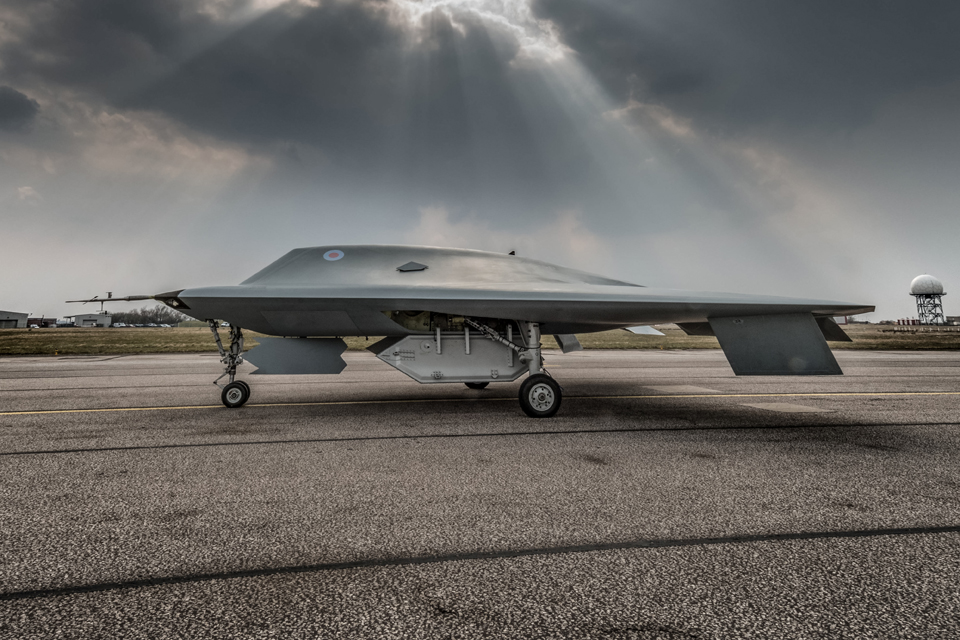 Coincidence that they published the pictures right after the MoU with Dassault?