A good link to understand the design evolution (structural) of the Hustler and understand why it regained most of its potential only after exiting active service:

While the Hustler was still in service, two major changes to all B-58s were integrated as a result of ‘5664’s loss. The first was a fix to the flight control system resulting in reduced activity gain of the aileron control input in response to yaw heading. Additionally, small trim surfaces found inboard of the elevons of several early B-58s, were deactivated and replaced by fixed trailing edge fairings.

The second change was a physical strengthening of the vertical fin and associated fuselage structure just forward of the tail. New aircraft were built with these modifications integral to the flight control system and structure, respectfully.

A second B-58 was eventually pulled from the production line and modified to the new standard. Just short of a month after ‘5664 and its crew evaporated in the skies over Oklahoma, Beryl Erickson climbed into this modified aircraft, taxied to the end of the main Carswell AFB runway, and headed skyward to complete the test that Fitzgerald and Siedhof had died attempting. Once at altitude and speed, Erickson shut down the right outboard engine. The airplane yawed, quickly stabilized, and moments later, recovered without incident. No ancillary problems were encountered. Within a week of the test the B-58 was officially cleared for Mach 2.0 flight in a high-q, far aft c.g. condition [ending a M1.6 restriction]
Click to expand...

Wingknut said:
Apologies if this is the wrong thread and/or old news, and apologies too that I cannot currently (for the life of me) find my original online source for this. It's credited to the Roger Cripliver collection and I am pretty sure I found it on a 'Combat Reform' site on protecting aircraft against attack, but more specific I can't currently be. Anyway, here is a diagram of a proposed hardened shelter specially for a Convair B58.
Click to expand...

As drawn, it looks to me like the external pod wouldn't clear the top of the ramp. I haven't checked the dimensions but the drawing seems to be to scale and there's a guide rail where a clearance trench would have to be. Go figure.
T 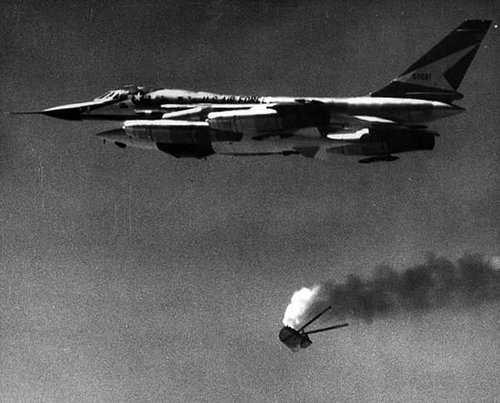 June 26, 1962: The RS-70 crew escape capsule for the XB-70 was successfully ejected from a modified pod carried by a B-58 at 20,000 feet. This marked the first time an escape capsule was flight tested before the plane for which it was intended was flown. The rocket-powered capsule was ejected downward from an inverted position.
Click to expand...