The U.S. Army is engineering its Apache AH-64 attack helicopters with additional avionics, radar and sensor technology to perform better in maritime environments, service officials said Monday at the Association of the United States Army’s Annual Meeting and Exposition in Washington D.C.

“We’re looking at sensor upgrades to the fire control radar and adding a maritime feature to the Apache. We want to extend the radar and broaden its bandwidth to pick up things in a littoral (shallow water) environment and detect small ships in the water,” said Army Col. Jeff Hager, Apache program manager.

The Army plans to test these and other upgrades in 2017 in order to keep the attack helicopter platform current into the 2050s, Army and Boeing officials said.

Part of the Pentagon’s rebalance to the Pacific involves a greater use of land and sea-based assets in the region, underscoring the need for the Army to strengthen its expeditionary capabilities. The Army has conducted multiple exercises with the Navy wherein they landed Army helicopters on Navy ships in order to prepare for these type of contingencies.

Additional upgrades will include software upgrades and improvements to the mission processor, Hager explained.

“The software-based radar improvements will allow crew members to see maritime littoral targets and be able to pick targets out at sea like they do on land,” he added.

The upgrades will also give the Apache the ability to better communicate with assets from other services through a connection with LINK 16, a digital data link used widely by the Air Force and Navy.

“This does give the crew members the ability to see joint assets, so everybody see the same combined aerial picture that we have in the Air Force and Navy,” Hager added.

The first AH-64E Block III Apaches are now returning from combat service in Afghanistan, after deploying this past September. While explaining the newer, high-tech Block III Apache received favorable reviews from crew members and commanders, Hager said the Army will soon begin work on a formal after action review of the aircraft’s combat performance.

In addition, the AH-64E helicopters are configured with what’s called Level IV Manned-Unmanned teaming, a technology which gives Apache crews the ability to view live feeds from nearby UAS and also control the sensor payload, Hager explained.

Was there not a dedicated naval Apache that was designed for such a purpose back in the 1980s? Are there any pictures of it still around?

Never got past the paper stage.

TomS said:
Never got past the paper stage.

Thanks for the link, I was not a member of this forum back then.

The Army has been doing USN support for a number of years with Apache. Even before the advent of the Longbow. The "E" model with Link 16 now means that the helicopter can link into the joint command and control network, so its data from the radar can be passed to the ships and aircraft overhead. It can of course also receive.
R

Aren't the UK's Apaches marinised and used to operate off the UK's LPH, HMS OCEAN?

Kadija_Man said:
Aren't the UK's Apaches marinised and used to operate off the UK's LPH, HMS OCEAN?
Click to expand...

It sure looks that way!

Kadija_Man said:
Aren't the UK's Apaches marinised and used to operate off the UK's LPH, HMS OCEAN?
Click to expand...

I am not sure if they are marinized but they were used in support of operations in Libya from the Med.
H

656 sqn had aircraft that were 'semi-marinized'. Apaches are dry fit built, i.e. metal on metal contact between components. The ones on Ocean (and i suspect a few more) were stripped and rebuilt with joining compound. To my knowledge, that (and extra TLC) was the extent of the marinization.


a couple of my phots 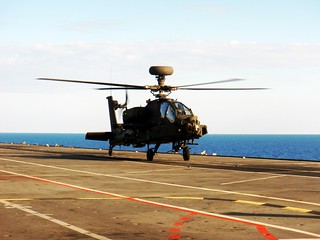 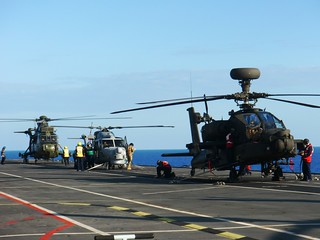 The British Apaches do also have a manual blade-folding mechanism, unlike most US Apaches, which have fixed blades. That's handy for airlifting as well as shipboard storage. But that's about the extent of it -- they would require much more extensive modification for regular operations at sea. Here's an article discussing some of the mods needed:

I haven't had the opportunity to see up close a non 'marinised' apache's rotors but I don't think the blade fold is really a modification. My recollection may be at fault but the blade fold worked in this fashion:

From spread- the rearmost of two pins holding the blades on is removed and replaced by a sacrificial pin to act as a bearing/pivot. The for'd most pin is then removed and the blades walk aft. Once imposition a block is inserted in the angle between the blades and the hub. The 2 flight pins are used to pin the blade to the block and the block to the hub. The blades are held at the tips with a rig attached to the tail boom.

Process is reversed for flight plus an independent inspection to make sure the pins are all secure.

Possibly the blade restraints required modification of the tail. I'm not sure. I'd be surprised if the attachment points exist on standard machines...

I found Boeing's description here. Seems like the aircraft mods are basically modifying the four bolts for easier removal. The rest of the kit is the saddle and four poles to brace the blades, those spacer blocks, and a handling pole to support the blades while they're being folded.

hole in the ground said:
Apaches are dry fit built, i.e. metal on metal contact between components. The ones on Ocean (and i suspect a few more) were stripped and rebuilt with joining compound.
Click to expand...