If the drawings below are accurate, the resemblance is a bit odd, and profuse apologies if the topic was discussed before.

Don't think so, IMHO. Rudder is different. One is a "bubble top", the other is a "razorback". The cowling is similar but not the same. The wings and landing gear are remarkably similar though. It makes you wonder if the an engineer from the German project ended up at FFVS, but with the war that would be unlikely. The engine for the Swedish fighter was a copy of the Pratt & Whitney R-1830 Twin Wasp, which was the same engine used in the V21. That alone will cause the cowling and COG and other factors to be almost the same as the J22. I would call them "kissing cousins".

The wings and landing gear really arent similar. FFVS uses a two-spar wing while the 109 had a single spar near the mid chord - also very likely the J22 is using a much more modern airfoil than the 109s NACA 2R. Landing gear is likewise completely different, with a much more complicated mechanism on the 22 retracting rewards vs the simpler 109s outwards retraction. The only real similarity between the two was trying to make the load path from engine to gear mount as short and direct as possible.

People should really stop looking at poor quality 3 views and drawing conclusions about design pedigree. The structural side of things is just as important as aerodynamics in aircraft design and if you aren't taking that into account than you aren't really comparing things.

Unless someone can prove that there was a sharing of data/staff/whatever between FFVS and Mess., I think this is just another case of a similar layout producing a similar looking end result that is easy to see as a "copy" if one only looks at the surface side of things.

Many thanks for the thoughts. After coming across drawings of unknown accuracy, I wondered if the two aircraft looked similar, and I got some answers.
J

Justo, what is item 38 (and possibly 37) on the cutaway. From the external view, I'd have said it was a roll-over protection post, but the cutaway shows something different. 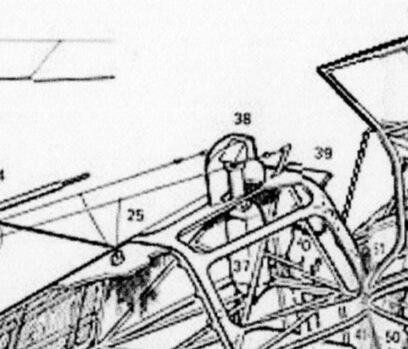 CJGibson said:
Justo, what is item 38 (and possibly 37) on the cutaway. From the external view, I'd have said it was a roll-over protection post, but the cutaway shows something different.

Could be a periscopic sight device for Hasselblad type camera?

Interesting place for a recce or gun camera. Is item 28 what I think it is?

CJGibson said:
Interesting place for a recce or gun camera. Is item 28 what I think it is?

Not many period photos of the J 22 seem to show this odd feature but the preserved example (3-L) at Malmsatt has it fitted: https://www.airliners.net/photo/Sweden-Air-Force/FFVS-J-22A/4261231
It is a gun camera, apparently fitted during 1945: https://www.ipmsstockholm.org/magazine/2002/01/stuff_eng_detail_j22_04.htm

Thanks. Seems a very heavy and complex gun camera installation!

CJGibson said:
Justo, what is item 38 (and possibly 37) on the cutaway. From the external view, I'd have said it was a roll-over protection post, but the cutaway shows something different.

It is the periscope for a vertically mounted gun camera (source: "FFVS J 22 in Detail", IPMS Stockholm)

CJGibson said:
Interesting place for a recce or gun camera. Is item 28 what I think it is?

Whatever it is, I very much doubt that it is a gun. It does not look like a Swedish 8-mm M22 or 13.2-mm M39, which were FN-Brownings. My best guess would be that it is an actuator rod for the tail wheel.
I

fortrena said:
Many thanks for the thoughts. After coming across drawings of unknown accuracy, I wondered if the two aircraft looked similar, and I got some answers.
Click to expand...

I suspect that the superficial resemblance results from the limited choices facing the designer of a fighter powered by a relatively low-power Twin Wasp radial: everything has to be compact and low drag. In addition to the differences mentioned above, though, the J-22 had a steel-tube fuselage, while the Messerschmitt had a light-alloy stressed-skin structure.
I

Not really. The installation is low-drag, on the center line, near the center of gravity, and unobstructed by other equipment and structural elements.
J

The weapons race started by the Soviet Five Years Plan in 1928, prompted the countries close to the U.S.S.R. to modernize their combat aircrafts. After the entry into service of the Polikarpov I-3, in August 1929, Lithuania ordered fifteen Fiat C.R. 20 fighters and Latvia seven Bristol Bulldog Mk.II. In Mach 1930 the prototype of the first Polish monoplane fighter P.W.S.10 flew for the first time and four months later the prototype of the Polikarpov I-5. At that time the VVS already had two-hundred-and-fifty I-3 in service.

In August Sweden ordered three Bristol Bulldog Mk.II and eight Bulldog Mk.IIA (286 kph) fighters in May 1931. That same year the Swedish Government ordered the construction of 18 units of the indigenous fighter Svenka Aero Jaktfalk. The VVS fighter strength was of three-hundred-and-eighty-nine I-3 and sixt-six I-5. In 1932 the expansion of the Flygvapnet was planned, with the construction under licence of thirty-six Tiger Moth and twenty-five Tigerschwalbe elementary trainers, joined by ten Sparmann S-1A advanced trainers in 1934.

With the publication of the Defence Act in December 1936, the second plan of expansion of the Flygvapnet to five combat wings was started. To equip these units with enough airplanes it was necessary to organize the indigenous production of forty-two Hawker Hart light bombers, eighty Junkers Ju 86 K-1 medium bombers, hundred-and-two Douglas 8 A-1 attack bombers, hundred-and-ninety SAAB 17 dive bombers, eighty-five Focke-Wulf Fw 44 elementary trainers and hundred-and-thirty-six North American NA-16-4M advanced trainers, which should be delivered between 1937 and 1941.

At 1937 the VVS strength was of 8,139 front-line aircraft, including 443 medium and heavy bombers. The Polikarpov I-152 started fighting in China.

On 11 May 1939, the VVS entered into combat against fighters of the Imperial Japanese Army in Khalkin Gol. In September, the Soviets were forced to sign an armistice, overcome by the technical quality of Japanese planes and pilots.

After its defeat in Spain the U.S.S.R. was also forced to sign the German-Soviet non-aggression pact and be satisfied with 'freeing' weaker objectives by occupying eastern Poland when the Polish Army had already been defeated by the Wehrmacht. That same month the ANBO VIII indigenous dive bomber took its first flight in Lithuania and its Government ordered thirteen Morane-Saulnier M.S.406 fighters that the French never delivered because of the war. Nor did the British deliver the Spitfires acquired by Estonia or the Hurricanes acquired by Latvia.

Despite the losses suffered in Spain, Manchuria and China, the VVS strength was of 7,320 aircrafts. On 30 November, the Soviets began the invasion of Finland. At that time the Flygvapnet possessed a front-line strength of only 140 aircraft (of which about one half consisted of Harts and Gladiators biplanes) but went to their aid forming the Flygflottilj 19, a volunteer unit with four Hawker Harts and twelve Gladiators equipped with skis undercarriages.

On 1 January 1940 the Swedish Government ordered a third batch of sixty Seversky EP-1-106 and two Republic 2PA attack bombers. On 6 February, they also ordered hundred-and-forty-four Vultee Model 48C fighters but, fearing that the airplanes might fall into Soviet hands, the U.S. State Department placed an embargo on the export of military aircraft to Sweden on 18 October.

The embargo also included the export of engines, so the Douglas 8 A-1attack bombers had to use the Bristol Pegasus XII, the SAAB 17 used the Bristol Pegasus XXIV and the Piaggio P.XII bis RC 40D and the North American trainers used the Piaggio P. VII RC 16, less powerful and reliable than the original Pratt & Whitney and Wright Whirlwind. The situation derived in panic and the Swedish Government ordered seventy-two Fiat C.R. 42 bis and sixty Reggiane Re.2000 fighters from Italy, as stop-gap solution until the indigenous industry could build their own fighters.

Unfortunately, the SAAB 19, a project of fighter based on the Bristol Type 153, whose manufacture was started in 1941, had been cancelled when the British rejected to continue the production of the 1,400 hp Bristol Taurus II engine. The SAAB 19 would have been a low wing monoplane with 10.5 m wingspan, all-metal construction, retractable undercarriage and armed with four wing-mounted 13.2 mm m/39A machine guns. Its estimated maximum speed would have been 605 kph and his maximum take-off weight of 2,690 kg.

On 1 January 1941, the design work of the J 22 'panic fighter' was started, under the leadership of Bo Lundberg. The General Nils Söderberg established the FFVS workshop, to temporary organisation intended solely for the production of the new aircraft. As the Swedes expected to get the fighters in the USA, all available aluminium 2024 T3 was already being used in the production of the S 17 and S 18 bombers.

The construction system of the J 22, based on that of the Finnish Myrsky, consisted of welded Chrome-Molybdenum steel tube structure covered with plywood panels. To circumvent the engines embargo, Sweden managed to purchase a batch of 100 Pratt & Whitney R-1830-45 Twin Wasp engines in 1942, from the Vichy-French Curtiss H-75 fighters, and Svenska Flygmotor-Trollhättan started an programme to copy the Twin Wasp as the Swedish-made 1,050 hp STWC-3G.