West Germany in our timeline has since 1951 been a constant pillar in the Western Alliance and a key partner or customer for modern weapons and other secret projects.
What if things had been different and other forms had occured.
German unification along Austrian or Finnish lines as a member neither of NATO or the Warsaw Pact. An unlikely one perhaps but the Soviet Union did offer it to German politicians.
Even less likely, but described in some German language novels, is a scenario where East Germany becomes more successful than West Germany and unification takes place within the Soviet bloc or variant of it.
In 1968 the West suffered a serious upheaval with a young generation questioning its parents' role in the Third Reich and hating US policies in S E Asia and Europe. This might have led to a revolution of the Left.
As ever the device is to look at other weapons and projects from our timeline. Joint German-Russian designs anyone? 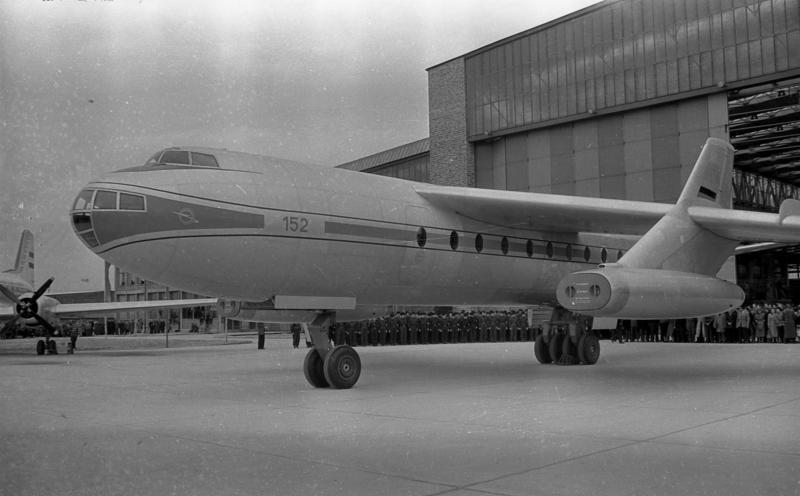 Perhaps we see a neutral strip of no-mans'-land through central Europe: Finland, Sweden, maybe Denmark, Germany, Austria, Switzerland, Yugoslavia, etc. These nations are loosely aligned with each other, but stubbornly resist attempts to lure them into NATO or the Warsaw Pact.

The Non-Aligned countries were more assertive in the 50s to 60s so a band of neutral countries in Europe would have been
possible.
They would have had an interesting Aerospace industry.

I know nothing about this monstrosity, but bicycle gear on a pax aircraft would probably be ... unpleasant for all those porpoising people in the back.
R

I know nothing about this monstrosity, but bicycle gear on a pax aircraft would probably be ... unpleasant for all those porpoising people in the back.
Click to expand...

Baade 152 airliner was designed by ex-Junkers engineers who returned from exile in the USSR. They tried to re-start the East German aircraft industry, including developing a new turbine engine to power the proposed airliner.

Baade 152 was one of the few high-wing jet airliners ever flown. The wing box interfered with passenger head-room while wheel wells limited the volume of under-floor baggage compartments. The wing was derived from the Alekseyev OKB1-150 jet bomber. The landing gear also followed the prevailing bomber bicycle configuration (B-47, B-52, French Vautour and Harrier) with most of the weight resting on center-line man wheels (just aft of the center of gravity). A conventional nose wheel retracted into the forward fuselage. Lateral stability was ensured by outrigger wheels retracting into the outer wing panels.

The first Baade 152 prototype crashed during its second test flight, perhaps due to a fuel flow problem.

The second prototype was powered by 4 of the new PIma engines.
The second prototype combined a pair of engines and the out-riggers attached to a single pylon under each wing. The second prototype also deleted the navigator's windows under the nose.
Baade 152 never had the chance to prove that it could compete - economically - with the French Caravelle or Boeing 707.
Before the airliner could prove its full potential, the USSR cancelled most new-design airplanes in Warsaw Pact countries. This was a political decision made in the USSR to prevent WARSAW Pact countries from building airplanes better than their Soviet contemporaries. It also ensured full-employment at Russian factories.
Remaining Pima engines were installed in DDR ships.
Last edited: Jul 12, 2021
Share:
Facebook Twitter Reddit Pinterest Tumblr WhatsApp Email Share Link