The Pursuit Bot, with the look of one six-legged yellow spider and the size of a cat, designed to neutralize dangerous lifeforms operating in industrial environments.

Mark-9 was built of electroactive polymers and carbon composites, its outer surface coated with graphene screens capable of replicating any color or image from the surrounding background, to render it practically invisible. Mimicking the impressive jumping and locomotion performances of real arachnids, the Mark-9 can run through uneven terrain and climb and jump up to thirty feet, but it cannot do so while running. It must stop for a few seconds to charge its artificial muscles with energy before jumping. It is for this reason that pursuit-bots operate in pairs, the Alpha robot handles the chase while the Bravo robot ambushes the prey.

Each Mark-9 adopts the 'tactical personality' required by its mission. Alpha deliberately reveals its presence using a high-visibility outer coating, Bravo uses dark colors, to hide in cavities, or metallic gray to camouflage against the machinery.

One of the best knacks of the Mark-9 is its ability to climb or descend using pipes or wires, hugging its legs around them to propel itself through its ventral grooved wheel. It does not need to stop when reaching the clamps that hold the pipes, it just sequentially separates its legs as it goes through the obstacle, a feat of coordination that only a robot can perform.

The Mark-9 uses hyperspectral image sensors and a photoacoustic spectrometer to locate its prey that is neutralized by injecting liquid nitrogen, 200cc of which is transported in an abdominal tank, or by throwing the fluid at a distance of twenty feet.

doesn't it make more sense to give him a laser weapon or at least a gun?
J

The robot is a silent killer designed to operate in industrial environments without damagong the machines, it uses a laser telemetric laser to calculate the jump range
U

Completely different Alien Hunter but in a similar spirit

Completely different Alien Hunter but in a similar spirit

Justo Miranda said:
The robot is a silent killer designed to operate in industrial environments without damagong the machines, it uses a laser telemetric laser to calculate the jump range
Click to expand...

Justo Miranda said:
The robot is a silent killer designed to operate in industrial environments without damagong the machines, it uses a laser telemetric laser to calculate the jump range
Click to expand...

laser weapon is more silent though
Click to expand...

The robot is intended to kill avoiding damage to the industrial environment (fragile hardware, explosive danger, electrical wiring,...) so a laser is silent, of course, but not compliant with that operational conditions. Killing with a syringe seems an optimal choice. And liquid nitrogen would wound any kind of organism. A toxin could be un useful against unknown species with unexpected immunity.
R

After everyone has left a huge mess... 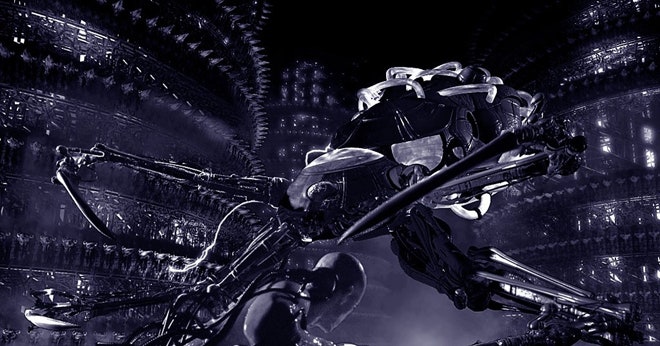 From the file marked “Evidently, many scientists have never seen even one scary sci-fi movie”: The Defense Department is funding research into battlefield robots that power themselves by eating human corpses. What could possibly go wrong? Since they apparently don’t own TVs or DVD players...
www.wired.com