I'm not sure how valuable this contribution is, but I found a video showing this beastie.

Thanks, Dannydale. Actually your "beastie" is the one at the top of the profiles comparison above, the A300-600ST Super Transporter, or Beluga, which COULD inspire the as-yet unbuilt A340 derivative.

The existing Beluga is impressive enough (espescially when it takes off over my parents house) an A340 derivative would be something to see, the dog would really go ape shit if that behemoth started visiting Broughton.

If you've never seen it, the beluga has quite a unique sound (in my opinion at least), very low frequency and doesn't seem to be engine related, you can feel it as much as hear it. so I guess it's to do with the amount of air the fuseelage has to push out of the way?

A330-200 eyed as Beluga successor
Rising output across Airbus product range drives airframer to consider options for next iteration of oversize transport
Airbus has tentatively identiﬁed an A330-200 derivative as the most promising long-term candidate to replace its ﬁve A300-600ST Beluga oversize transports. The airframer has already embarked on a programme to restructure its A300-600ST operations to cope with the demands of ramped-up production during the next four or ﬁve years. This programme, designated Fly 10,000, is intended to increase the ﬂight work performed by the transport ﬂeet to 10,000h per year in 2017, from the current level of about 6,000h. Airbus says it is changing “ways of working, opening hours and organisation” to meet this demand, which would double the number of weekly ﬂights to about 120. The greater Beluga workload will primarily arise from a surge in A350 output. However, Airbus will also require capacity for the A400M military airlifter, which will partly offset a decline in A330 production, while A320 and A320neo rates are set to remain high. Airbus recently indicated to Flightglobal that the A300-600ST ﬂeet would probably remain in service for another 10 years or so. But while the ﬂeet stay in use until about 2025, the cost of operating the type will increase as the aircraft age. The airframer has initiated a study to replace the A300-600ST ﬂeet in the long term. “No decision for immediate launch has been taken,” it stresses. But to address any capacity limitations beyond the Fly 10,000 scheme, as well as the ageing of the current Beluga ﬂeet, Airbus is likely to aim for 2018-2020 as a window to have a new aircraft available. Several airframes are being considered as a platform for a Beluga successor, notably the A330-200 and -300, as well as the A340-500 and even the A300-600. While the current Beluga ﬂeet is carrying A350-900 sections, the size of the A350-1000 central fuselage assembly will determine the ﬁnal cross-section for the freight hold of the new transport. The A300-600ST has a hold diameter of about 23ft (7.1m). As well as the requirement for high payload capabilities, airﬁeld landing limitations at its UK wing facility in Broughton will also determine the eventual choice of base airframe. Airbus believes an A330-200 variant – tentatively designated the A330-200XL – could potentially cope with the landing criteria at projected weights of about 135t, and is the most promising option.
David Kaminski-Morrow, London, Flight International, 19-25 February 2013, page 9
Click to expand...

Could the next Beluga be made big enough to carry chunks of the A380, eliminating the land-based convoys ?

Airbus gave more details of the modified aircraft, which is scheduled to enter service in mid-2019.
Airbus programme chief Didier Evrard, speaking in Toulouse, said the jet – currently designated the Beluga XL – would have a 1m (3.3ft) wider cross-section than its predecessor.
Click to expand...

interesting comment from the ex-Tech director of the project 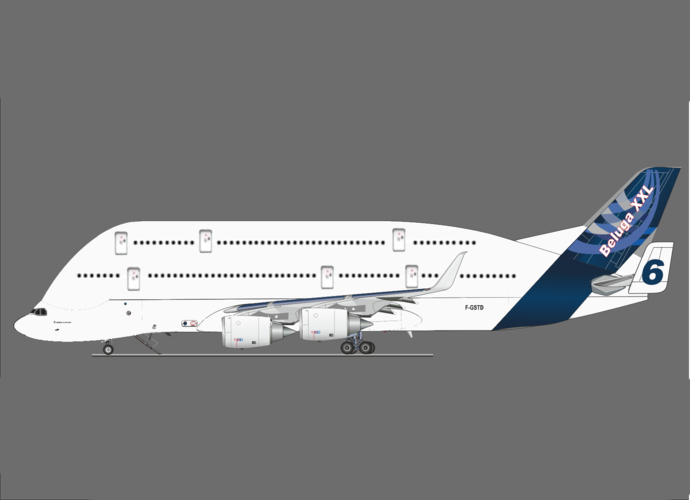 No what-ifs in this forum section please. I'll move to a more suitable location later.
T

shame they didn't converted an A340-600. that would have made one hell of a Beluga - XXXXXL