The interesting thing about the S1A1 is that it was a radar-equipped nightfighter with the radar antenna enclosed in a wooden radome rather than "hanging in the wind". That's a fairly sophisticated radar for the time period and it would've been interesting to see the results they'd have gotten with it.
T

Hello best people there was a late war project of an nightfighter by Aichi.
It was named the Aichi S1A1 Denkoh i believe it means bolt of light,it was planned with remote
controlled gun turrets and a radar.
I believe a parabolic shaped antenna,does some one have for me drawings or artist impressions
of this fighter? i understand there were even photos of an mock up.

Ahem, T-50... one of the key rules of this form is "no sponging"... Please contribute with something to the amuont of info here, from time to time, please....
T

could some one tell me what type radar was planned for the Denkoh? was it indeed a parabolic
antenna? or stay the Japanese to the Yagi type antenna configuration?
I read that the Japanese Electronic engineers were indeed developing a 10cm radar,maybe with German acquired documents.It believed to be similar to the German Rotterdam gerate.
Anyway the Japanese were working on more advanced radarsystems,I'm curious of they were planned on the S1A1 Denkoh or other planned aircraft
regards T-50

There's a good list of information on Japanese radars here. Plenty of surface sets operating on 10cm were developed without German assistance, but there doesn't seem to have been any push to use this wavelength for AI.
S

The s1a1 nightfighter was to bee equiped whith the TAMA3 centermetric radar discribed in this link[http://www.star-games.com/exhibits/japaneseradar/japaneseradar.html/url]
T

very interesting but it tell not what type of radar deceiver it used,namely is it Yagi or parabolic.
The parabolic antenna is on my opinion more modern and compacter than a Yagi antenna
T-50

Does anybody know if there were plans / proposals for enhanced versions of the Denkoh? It seems like a perfect candidate for more powerful engines such as the HA-44??? Perhaps a pressurized cockpit version was considered?

I hope someone can provide me with some info or pics of theprojected Japanese Nightfighter project of the Aichi company.
Its the Aichi S1A1 Denkoh or bolt of lightning in English,It was a two engined fighter with a heavy armamend.
It consisted with heavy guns under the nose of the machine and a remote controlled gun turret on the back,also a 10cm radar set was provided for this very promising machine.
I'm especially interested of pics of modelkids and radar of this machine,Ill hope someone can help me with this

Hi blackkite San, thank you very much for the pics and link!
very interesting photo of the mock up in front position, I haven't seen only pics of the mock up taken from the side.
the last pic is for me very rare and awesome!
Do you know something about the planned radar set of the Denkoh? I presume this was a parabolic type antenna,and it worked on the 10cm band
With best regards
Gerald

Much more handsome! Reminds me of the Ki-83 too...

Would caused a fair bit of trouble for the USAAC if it had manged to reach service in even limited numbers, IMHO.

Thanks! But Uhu is one of the most handsome fighter for me.
To hear B-29's completion in 1943, the INJ ordered Aichi to develop authentic night fighter.
The IJN's request for this night fighter was as follows.
Maximum speed ; 685km/h(370kt)/9000m, Endurance ; 5hours(4000m), Time climb to 6,000m ; 8 minutes, Take off run ; under 400m, Armament ; 2× 30mm canons, With radar.
Aichi concentrated to develop this fighter with there all resources from November 1943, finished design in May 1944, completed mock up in August 1944. Aichi judged it's maximum speed was only 629km/h(340kt) with Homare(NK9K) engine (IJN's request),they planned to use turbocharger to realize 679km/h(367kt) maximum speed, but it's difficult for Aichi to develop turbocharger quickly, they changed design to use oxygen injection into the engine cylinder and forced cooling fan , then estimated maximum speed became 635km/h(343kt) and finally became 588km/h(318kt). The armaments ; 2×30mm or 20mm canon(nose) and 2 ×20mm remote controlled turret behind the cockpit. There was a speed brake bottom of the fuselage for same speed flight when B-29 interception. No.1 aircraft(95% completed) was destroyed in 3/12/1945 by B-29 bombing prior to destroy B-29.

So if they had just left the engine alone, they would have not only finished development a lot sooner, but might have gotten a 22kt higher maximum speed?

This description is from my No.2 bible. It include contradiction. But I think Denko's maximum speed 588km/h(It's Aichi's data) was proper because Homare was not so powerful compared with it's specification at the day because of low quality fuel,large size same as Ginga and heavy weight(10ton). I think Aichi considered this fact. I believe Denko could mark more than 629km/h(340kt) without oxygen injection using high quality fuel and spark plug. Sorry I can't find the information about Denko's radar.

blackkite said:
This description is from my No.2 bible. It include contradiction. But I think Denko's maximum speed 588km/h(It's Aichi's data) was proper because Homare was not so powerful compared with it's specification at the day because of low quality fuel. I think Aichi considered this fact. I believe Denko could mark more than 629km/h(340kt) without oxygen injection using high quality fuel and spark plug.
Click to expand...

Good point. I hadn't taken the increasingly dire fuel situation at the time into account.
T

Yes it was but its closer to the American black widow night figher,because it has like his US counter part remote gun turrets and separated cockpits.
Heinkel He-219 has its crew placed in one cockpit.But their were both very advanced nightfighter types

Thank you very much Ed.

Here is another view of a Aichi S1A wooden mock-up.

Hi! Clear mock up images and three side view drawing. 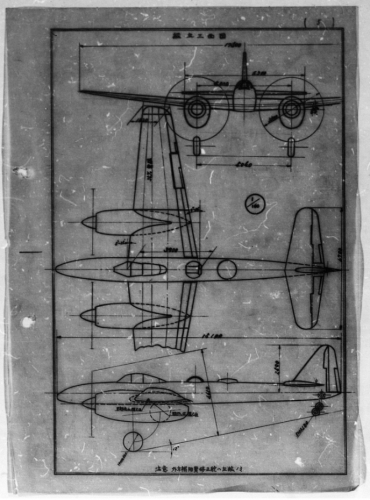