Is this AH-1Z a newer version of the AH-1 Cobra gunship? The designation is the same, but i don't know if the helicopter is the same.

Try googling "AH-1Z" and see what you find

That was so stupid. I new that was the Super Cobra and it just did not compute in my head. And SentinalChicken, what do you mean by *smack*?
F

6 Sidewinders...
Is that even realistic as an operational load?

Firefly said:
6 Sidewinders...
Is that even realistic as an operational load?
Click to expand...

If you didn't have fixed wing aircover and needed to escort in a helicopter assualt it might be. Back in the 80s the US (and probably others) did some testing and an attack helicopter armed with AAMs is surprisingly deadly even against fighter aircraft- provided the fighter doesn't just pick it off from long range that is. WVR with a Cobra with six AIM-9Xs and a HMCS. . .yikes.

I am not sure that you could carry six. The Cobra was prone to compressor stalls when firing the later versions of the 2.75inch rocket and other high velocity rocket / missiles. We were restricted to shooting pairs. Shooting a AIM-9 from the two rack positions closest to the fuselage might have had the same effect along with gas ingestion issues... maybe. Then again I'm talking about the AH-1S, not the USMC AH-1W or Z.

The AH-1W carries Sidewinder/Sidearm at the outboard wing station. The AH-1Z normally carries them on new wingtip stations as in the picture attached I don't know if the underwing stations are available for them as well, and am not sure what the point would be in carrying six unless you were planning a mobile antiaircraft ambush for fixed wings ( a concept proposed 40 years ago as one of the roles of their proposed S-67 gunship).

The picture showing the AH-1Z with all the armament is probably a publicity "hero" shot showing some of the different ordnance the Zulucobra can carry (maybe six different types of Sidewinder/Sidearm?).

I thought the Sidearm missile left service YEARS ago? And does anybody know the IOC date for the AH-1Z AND UH-1Y? I have looked at 5 different sites and have gotten 5 different answers. It still looks like it will chew Jihadis and tanks up for breakfast! ;D

The Scout Radar would be a nice upgrade for the AH-1Z.
But I do not like its position on the starboard wing-tip. I'd prefer it over the rotor - or near the main rotor like the sensor turret on the Eurocopter Tiger HAD.

I remember a photo of a mockup over a AH-1Z cobra mockup of this system, it was in a IAPR, wait a minute....

Interestingly, earlier in the decade Bell teamed with Longbow International, a teamup of Lockheed and Northrop/Grumman to market the Cobra Radar System, which was essentially Longbow mounted in the same place as Scout, although I remember it being a bit taller. Since the Marines weren't interested, it was primarily aimed at export. This sort of faded away. It looks like Northrop Grumman is reviving the concept on their own. Some of the changes are that Scout can be mounted on either wingtip and could be retrofitted to earlier Cobras.

Found this on Google while looking for the Lockheed Persistor concept (whereabouts still unknown). Thought you guys might like it. Enjoy!

XP67_Moonbat said:
Found this on Google while looking for the Lockheed Persistor concept (whereabouts still unknown). Thought you guys might like it. Enjoy!

Look around that same area and you can also find the one for the UH-!Y and EagleEye

I love the look of the AH-1Z, even if it isn't as survivable as the AH-64 series.

So how much does this (last?) model of the Super Cobra have in common with the original AH-1G? I imagine it is pretty much an entirely new helicopter by this point.

One from the archives: a rather basic artist's rendering of a wheel gear configured AH-1Z, from a ~1999 timescale brochure titled "What You Should Know About The KingCobra and it's [sic] Competition."

I believe this was related to the Turkish ATAK competition (unless Bell was also secretly promoting the Zulu to Peru at the same time ;D), the AH-1Z having initially 'won' ATAK in July 2000. A Defense News article from mid-2003 subsequently revealed that "the Turks gave up their insistence on a wheeled version, agreeing to a platform with skids, like the U.S. Marine version [which] greatly reduces the cost,” though Turkey ultimately ditched the Zulu and went with the T129 instead.

Plus the logo for the now discontinued KingCobra designation, from the same document.

Bell to offer Ah-1Z to South Korea..
i thought South Korea had their own attack helicopter project? 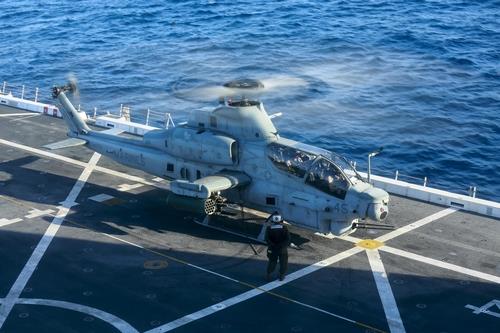