The Aeronautics and Cosmonautics Romanian Association (ARCA, from Romanian spelling) is a non-governmental organisation founded in 1999 that was an Ansari X-prize entrant. It is now active in the Google lunar X-prize competition.

The original Ansari X-prize entry is described in the attached PDF (from http://space.xprize.org/ansari-x-prize/aeronautics-and-cosmonautics-romanian-association). The proposed vehicle, called Orizont, was a VTVL rocket with a passenger capsule on top - both rocket and capsule were to land on the sea by parachute.

Vehicle and mission specs from the attached file are:

After completion of the Ansari X-prize competition, ARCA did a major redesign of Orizont resulting in a winged variable geometry vehicle, designated Orizont 2B.

[quote author=https://www.arcaspace.com/en/orizont.htm]
Flight sequence
The vehicle will take-off from the ground with an expandable landing gear.
It will climb at 13.000m during 190 sec. The final speed will be around 750 km/h.
At 13.000 m and 45 degrees angle the main hybrid rocket engine (Hydrogen peroxide 85% and paraffine wax) will be ignited. Immediately after the start the vehicle will begin to accelerate rapidly, the aerodynamic surfaces putting the vehicle to a 60 degrees trajectory. This trajectory will be kept for the entire time of the rocket engine run.
After the rocket engine shut-down the ship will continue to climb inertial at an 60 degrees angle. The low atmospheric density from those altitudes will not allow the pilot to control the attitude of the ship from the aerodynamic surfaces and the ship will be controlled with the reaction control system (RCS).
At the maximum altitude of 100 km, the ship will have the lowest speed from the entire flight sequence. The pilot will continue to control the ship with the RCS.
After reaching the 100 km altitude, the vehicle will start the descent. For less then half the distance, the pilot will experience the effects of imponderability. When the ship will encounter the first dense atmospheric layers the use of the RCS is not necessary. For the landing procedures the pilot will deploy the wing progresively. The landing will be made on a runway using a lightweight landing gear.
[/quote]

I believe the above scenario is describing air launch from another (unspecified) vehicle.

An Orizont 2B airframe has been built (see pictures here, one attached) but I don't think it has been flown and work on this design is halted.

ARCA's latest suborbital space tourism design is Stabilo. This uses a puller/tractor engine arrangement, like a scaled-up launch escape system with the passenger module at the bottom. Stabilo is air-launched from a balloon and its engine uses hydrogen peroxide as a monopropellant.

[quote author=www.arcaspace.com/en/stabilo.htm]
Stabilo is a balloon launched suborbital manned system created by ARCA after the end of the Ansari X Prize Competition. ARCA hopes that STABILO, through it's unique design and safety capabilities will capture the attention and will stimulate the imagination of the public. This vehicle was build in two variants: "1" and "1B". First variant is designed for future comercial aplication, while the second variant is a vehicle designed to reach high suborbital performances.
[/quote]

More detail is available from the above link and there are several images at http://picasaweb.google.com/dragosmur/Stabilo# (a couple are attached).

Testing of the concept has started:

An Orizont 2B airframe has been built
Click to expand...


One thing that does strike me, though, is how a lot of these X-Prize contestants went through major changes in configuration with each of their design iterations.
To use ARCA purely as an example, First, effectively a giant Estes rocket, second, Thunderbird One, and now third, a balloon lofted pod.

I suspect that you could understand a lot about these "competitors" simply by being aware of the available engineering visualization software. My guess is that a lot of these companies were no more than 2-3 guys who thought that it would be neat to compete, bought a program, and came up with a nice graphic of their "design." Then they went to find investors. As they continued, they played around with the software a bit and their design evolved. When they failed to get investors, they folded up shop.

All they ever produced were a few decent-looking jpegs of a rocket developed with a basic bit of design software.

Here's the latest concept from ARCA


But my question is...why the quasi YF-23 aerodynamics for a civil space project?

XP67_Moonbat said:
But my question is...why the quasi YF-23 aerodynamics for a civil space project?
Click to expand...

I only wish that they would paint some flames on the side. Or a shark mouth on the nose!

XP67_Moonbat said:
But my question is...why the quasi YF-23 aerodynamics for a civil space project?
Click to expand... 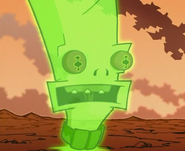 I don't know where to start with this one ... other than (obviously) to say that I want one! Very cool seaplane ;D if just a tad over-engineered ...

They claim the aircraft will be built by the middle of 2012, fly by the end of that year and be supersonic in the first half of 2013. Oh, dear.
M

The only thing they forgot is to make it submersible too...

Ooooh! Now we know that it's real--not only do they have PowerPoint slides, plus animation, but they also have a scale model!

Methinks one will probably not get into space with a design borrowed from a completely different type of aircraft with gimmicks from a third design bolted on. What can this weird stealth seaspaceplane do that a Rutan spaceship or Falcon rocket cannot? At least they took their time and made it look like a plane instead of a kitbashed jumble of parts that look cool.

The 'geckosp' guy definitely seems to know what he's talking about. He points out technical aspects of the design to other nonplussed members, but they're kinda not getting the idea or busy developing a bit of fanboyism for the thing.

Yay, they already started to manufacture the positive molds for the composite fuselage of E-111!

So they're seriously going to build the thing. Bully for them indeed, especially if they can make it work! I still think using an American stealth fighter shape with a Rutan-style head on it is a bit questionable for this seaspaceplane idea. I really really want someone to try an FDL-5ish shape on a Sea Launch type rig, actually!

Update on Military Photos for this beastie. The rocket engine design looks solid, but they really need to reconsider that airframe design!

Lot's a shiny graphics. And.... if they do end up building it, well it looks like Saturn I might have something of a comeback. In a kinda-sorta way. . Enjoy!